In a world of normal kitties, there exists a place nestled in the distance called Kittygurumi™ City.

This city is far different from the others and unique for its one special characteristic: nothing is quite what it seems.  What looks to be a pile of colossal-sized stacked cans of cat food is actually the city's 5-level department store.  The upside down cardboard box is in fact a private telephone booth...

One specific group of friends in Kittygurumi City always plan get-together each week.  These Kittygurumi share a tight bond and have fun using their imaginations to play with each other. 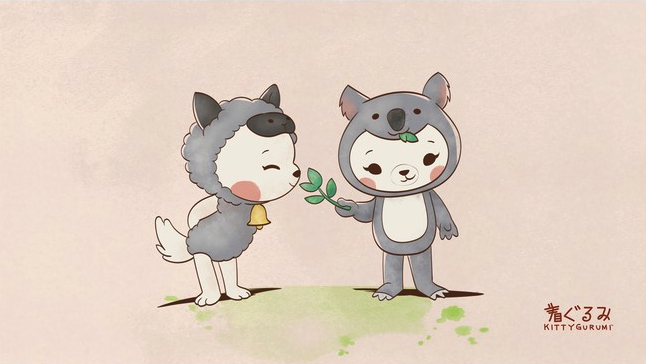 Regina is a sophisticated Persian Kittygurumi, almost always occupied with grooming and upkeeping her silky-smooth fur.   Maintaining long fur and keeping it tangle-free and shiny is hard work!

Regina runs a tiny personal salon in the middle of the  city where she grooms the other Kittygurumi.  Her aspiration is to one day become a famous hairdresser (or rather, 'furdresser').

As sophisticated as Regina tries to be, she still makes clumsy mistakes such as tripping over herself.  She is also very gullible and regularly falls for Bessie's pranks.

She dislikes being called 'Gina' but will still tolerate it.

To Florence, food is everything - her life revolves around food.  She's already tried all of the different kitty food that Kittygurumi City has to offer, and now she's moved onto her next goal of tasting every flavor combination that she can think of. Florence considers herself a 'cat food connoisseur' and everyone in town readily agrees to that title without question.

One bad habit that Florence used to have was scarfing down all of her food within the blink of an eye.  This only became a bad habit because she grew up with two younger brothers who would routinely swipe her food when she ate too slowly: "you snooze, you lose!" they would say.

During her free time, she enjoys watching cooking shows on TV.  Her dream job is to be a food journalist and travel the world while eating all different kinds of cuisine.

At first glance, Mildred might seem intimidating or even a bit scary.  With the scar across her cheek and the tear on her ear, along with the scowl on her face, Mildred's appearance definitely looks rough around the edges.  Nonetheless, once you become more acquainted with Mildred, you'll realize that she is undeniably a kind and compassionate Kittygurumi.

The reason why Mildred's outer impression looks menacing is because in the past, she had to adapt to living in soggy boxes in city alleyways and foraging for fish from trashbins at a young age.

Mildred became used to this style of living, so her outlook on life was cynical - until one day she decided to leave the big city and travel to Kittygurumi City for a change.  Afterwards, everything that she was accustomed to in the harsh big city was turned upside-down: everyone in Kittygurumi City was kind and loving, and they all accepted her with open arms and paws despite her intimidating facial expression.

These days, Mildred has happily adjusted to her new life and she loves meeting new cats.

Sadie is a source of endless upbeat energy, generally causing her to be well-loved within the community of Kittygurumi City... for those who can keep up with her energy level, that is.

The various kitties who would rather prefer to take it easy normally try to avoid making eye contact with Sadie, or else they suffer the risk of getting swept up in whatever activity Sadie's hyperactive imagination conjured up for that day.

Even by kitten standards, Sadie is very playful and sometimes gets called 'childish' by other Kittygurumi who can't handle her wild games and plans.

One of Sadie's favorite pastimes is sports.  Although Sadie prefers high-energy activities, she'll happily spend time with her friends for even mundane things such as a relaxed walk to the post office.

If there was just one word that could be used to describe Bessie, it would be "prankster".  Bessie loves to tell jokes and tease her friends, but must of all she loves playing harmless pranks on them.

Bessie learns the best pranks by watching videos and she tries to replicate them.  Unfortunately, this means that a lot of her friends become her 'test subjects' for the various pranks she learns.

Bessie gets along well with Sadie.  The two often get together to playfully terrorize the inhabitants of Kittygurumi City with their high-spirit ways.

Even though Bessie experiences her friends getting exasperated with her every now and then, she really treasures her friendships and truly just aims to make them all laugh with her pranks and cheesy jokes.

Doris tends to see the world a bit differently than the other Kittygurumi; through Doris' eyes, her version of the world looks much more vibrantly colored and bright.  Her number one hobby is staying in her room to paint, draw, and fill in coloring books.

When she's not making art (which is rarely ever), she'll take photographs of her friends and nature.

Some Kittygurumi think that Doris is eccentric and fidgety - the 'eccentric' part is totally true but the 'fidgety' part may be largely due to the cans of soda and cups of coffee that Doris drinks throughout the week.

One time after Gladys objected to the amount of sugary beverages Doris drank regularly, Doris reluctantly tried switching to unflavored carbonated water but unfortunately that only lasted for half a day.

Gladys loves to nurture others and to make sure that all her friends are comfortable, safe, healthy and happy - she is what many would call the resident "mom friend" of Kittygurumi City.

If there's anything that you need to feel better, you can be sure that Gladys will have it ready and prepared for you immediately. Some Kittygurumi are guilty of even pretending to be sick just so that they can be taken care of by Gladys but she doesn't mind.

Gladys has been ballroom dancing for as long as she can remember.  During the day, she enjoys teaching her own balling dancing classes.  As a result of her extensive daily practice, she is admired for being elegant.

At night Gladys likes to wind down by stargazing and creating her own original tea blends ranging from a mix of floral, herbal, and fruity.

Everyone in the city knows Gertrude, but incidentally, not necessarily by name or through introductions - it's because Gertrude can always be spotted hanging out somewhere in the city with a pile of books!

Gertrude is up for reading any genre but her favorites are fantasy and sci-fi.  Classic Kittygurumi series like "Hairy Pawter" and "The Chronicles of Catnip" hold a special place in Gertrude's heart.  Although Gertrude is relatively quiet-spoken, she will absolutely talk your ear off if she hears any mention of her favorite series.

Out of every kitten in Kittygurumi City, Gertrude is the most laid-back and relaxed.  She prefers peace and quiet which is why she dislikes loud thunderstorms and parties.

Unfortunately for Gertrude, despite her attempts to stay out of trouble, she often gets dragged into various situations by her friends.